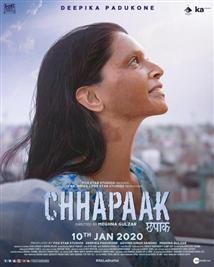 A Thought Provoking, Emotional Ride That Carries An Impactful Splash!

Chhapaak, that has a non-linear screenplay, is a very interesting, thought provoking film on acid attacks that happen across the country and the treatment too by Meghna Gulzar is grounded and apt for this sort of a subject. The most intriguing part of the film was undoubtedly the parts of the flashback that collectively explain the attack that Deepika (Malti) faces. However, the larger picture�s intention makes it a film that would get you thinking rather than just sympathise with the lead character, unlike in most other films.(more)

A brave story of a woman's grit and indomitable spirit

Chhaapak is a sensitive film with a delicate, yet powerful, handling of a heinous crime against women, and an important story that needs to be heard.(more)

Chhapaak is a story that makes you sob and smile at the same time. It's a sensitive, brave and gut-wrenching story that's not easy to watch, but definitely worth telling.(more)

Chhapaak has several parts that are delicately crafted. But the aggregation of the elements that constitute film does not somehow yield something greater than the sum of the parts. Nonetheless the parts that work do make Chhapaak essential viewing. Watch it not just for Deepika Padukone but also for what it has to say about a social scourge that refuses to go away.(more)

'Though its a story of inspiration, Meghna Gulzar's Chhapaak is not the kind of film you walk out feeling entertained or ecstatic

Chhapaak is solid, uncomfortable viewing, but it is also meditative and meandering. Towards the latter portions, it wanders off a bit unsure about the direction it wants to take -- a personal story, a public story or catch a breath in Meghna Gulzar's verse.(more)

Chhapaak an emotional force of its own though some may end up finding it measured to a fault. The only excess the film indulges in, is FabIndia. The wardrobe of almost every character/actor appears to have been sourced from the store. And that makes for quite a visual splash.(more)

Deepika Padukone Stands Brave In This Story Of Triumph Over Tragedy

In one of the scenes in the film, Deepika Padukone's Malti quips, "Unhone meri surat badli hai, mera mann nahi" and it makes you realize the importance of standing confident and undeterred even in the darkest phase of life.(more)

A Well-Intentioned Film That Only Scratches The Surface

Chhapaak has its share of rewarding little moments but also feels like it only scratched the surface of the cardboard covered mirror.(more)

Chhapaak is short and what stays with you after the film is over is Deepika's brave act, Vikrant Massey's stunning ability to be an amalgamation of many characters and emotions at the same time, and the girls - acid attack victims who struggle, fail, who don't understand why this happened to them, who seek justice but also a sliver of normal life. And that sliver sometimes comes with the reconstruction of a melted ear on which an earring can dangle, its happy swing lighting up not just their face, but our insides too.(more)

Chhapaak makes you feel every moment of an acid survivor's life. It is a shame therefore that Meghna and her team let the songs hamper the pace of the film. Some of the songs are necessary and don't seem like a hindrance. The title track Chhapaak in Arijit Singh's voice stays with you. The relationship between Deepika and her brother too is left frustratingly unexplored, to the point that not even a word is exchanged between the siblings. At points, the editing is not smooth.(more)