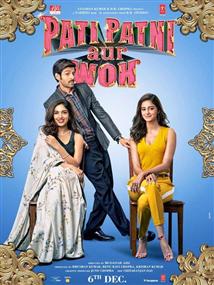 If you are looking for some good entertainment this weekend, this one could be a delightful watch.(more)

Alternating between a farce and melodrama, thankfully none of it coming from the women, Pati Patni Aur Woh can't decide whether it wants to be the climax of a Priyadarshan comedy or give the cad a dose of his own medicine brand of cheeky payback.(more)

This iteration of Pati Patni Aur Woh manages to convey two truths: one, Bollywood''s fictional heroines have evolved much faster than their male counterparts and two, film comedies that Mumbai churns out these days are no patch on the ones that the industry produced in earlier decades. Yet, this is a passable substitute for the real thing, which was far livelier and wittier.(more)

Our 'pati' may have redeemed himself, and the 'patni' and 'woh' may have lifted the film somewhat, but to wish for good taste in a comedy dealing with straying husbands and wives-and-other-women-in-holding patterns is no laughing matter.(more)

In 2019, the men as seen in this movie, are still taking women for granted, and the women, who maybe independent-spirited, are still responsible for forgiving and forgetting. (more)

Pati Patni Aur Woh is a fun and entertaining watch and should not be missed to erase all the bad memories created by the original one. The film has a few surprises which are not reason enough to make the film a compulsory watch. If you are free this weekend and want to enjoy some time with friends and family, go watch this film with them and come home unaffected.(more)