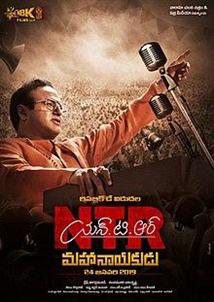 'NTR: Mahanayakudu' is a confused biopic that fails to accurately encompass the political journey of a legendary actor and politician.

NTR:Mahanayakudu shows only parts of one term of a three-term CM. To call it a biopic would be a great disservice to NTR's political journey. (more)

Mahanayakudu is a little over two hours, but feels longer. It also feels incomplete, since it's a small part of the political journey and doesn't actually portray what made him a 'maha nayakudu' (great leader). Would the biopic have worked better as one film, with a taut screenplay minus the indulgence? Maybe.(more)

NTR Mahanayakudu showcases NTR, the legendary politician, to the current generation. Balakrishna's splendid performance as NT Rama Rao and Krish�s deft handling of the political events that rattled Andhra Pradesh in the late 80s are the major highlights of this political drama. On the flip side, the abrupt climax, the serious tone throughout the film and a slightly underwhelming subplot between NT Rama Rao and his wife Basavatarakam may hinder the film's prospects to an extent. NTR Mahanayakudu is definitely a one-for NTR fans but for the regular audience the film may end up as just a one time watch.(more)

The film also becomes an exercise to showcase Chandrababu Naidu as the most-trusted alludu of NTR.(more)