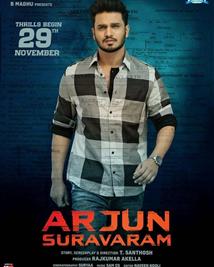 Works in bits and pieces.

Arjun Suravaram deserves to be watched, even if just for the fact that it offers to bring in a novel story to Tollywood, something beyond the usual love stories. And watch it especially for Nikhil, you won't regret it!(more)

Arjun Suravaram is an engaging crime thriller with a novel concept. The thrills showcased, breezy narration and Nikhils performance are basic assets. The film starts on a very dull note but picks up once the main plot is unleashed. Nikhil's long wait will surely pay dividends for him. If you ignore the slightly sluggish climax and some logic, this film ends as a good watch this weekend(more)

It is an surely an exciting idea on paper, but the director's imagination couldn't let it go beyond being mediocre. (more)

The film is definitely a worth watch because of it's high technical values with the high voltage performances delivered by the protagonist. First half has been embodied with thrilling elements, thus a gripping one. If more creative stuff is infused to second half , this film would have hit success milestone.(more)

Arjun Suravaram has some interesting tense moments. The middle portion is quite compelling but the penultimate portion leaves much to be desired.(more)

Arjun Suravaram is a film with a contemporary subject and director T.N. Santosh has done a honest remake of his Tamil offering. Though there are some cinematic liberties and a few loopholes in the story, film is interesting as a one-time watch.(more)

Arjun Suravanam could have been among the notable films this year. It's laughable when the CEO of a TV channel introduces Arjun as a senior reporter with 'one year experience'. The BBC interview and the comic bits featuring Vidyu Raman weren't great either.(more)

The premise and storyline are exciting. Good performances and some nice technical output help. The action scenes should have been gripping. The film builds a loose narrative around the scourge of fake degrees. It's more of an action film than a thriller.(more)