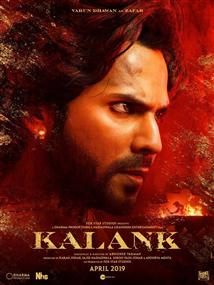 An Ambitiously Made Tragic Drama That Awfully Fails

Abhishek Varman's 'Kalank' ends up as an energy draining experience for the viewer despite having handful of drama, poetry, stars, stunning visuals and songs!(more)

'Kalank' is a true labour of love that tells you a story laced with beautiful moments that will tug at your heartstrings.(more)

Kalank often feels too much, and I only wish it made me do the same. It is a stunningly plated meal, but needed salt.(more)

Kalank has unmistakable contemporary resonance because it celebrates the transformative power of love and reconciliation in a time of rampant discord. It is worth a viewing not only for what it says, but also for how it says it.(more)

Kalank uses the idea of Alia being 'giraftaar' in her marriage. That idea holds true for anyone watching Kalank too. You feel like a prisoner. Exercise your choice. Watch Kalank ONLY if you don't have any.(more)

KALANK is a visual spectacle that lacks soul and falters big time on account of its writing, length as well as music(more)

Kalank is surely not from those "kuch daag" which are good. It's a skid mark on every actor's filmography associated with the movie. Stuns visually & that�s about it! Me to Karan Johar after this: Peeche dekho, peeche toh dekho (Baahubali).(more)