Ee Ma Yau is a great attempt from Lijo Jose's stable. He has taken up the theme of death and given it a very symbolic representation through irony and dark humour. This is a movie not to be missed.(more)

Lijo Jose Pellissery Raises The Bar Even Higher With This Sterling Endeavour!

With Ee Ma Yau, Lijo Jose Pellissery has raised the bar to another level. An exemplary attempt like this is rare and unseen.(more)

The movie talks about a funeral and nobody is leaving without shedding a drop of tear or without a heavy heart. With groundbreaking filmmaking, Lijo has set a standard that is not easy to conquer. Without a shadow of doubt, this has to be one of the finest dark movies that Malayalam cinema has ever seen. (more)

Everything is intense but ultimately fails to achieve its purpose.

Shed all the hangovers of Lijo Jose Pellisserry's previous films while booking tickets for his latest movie as the experimental director is ready with something that is totally different from the romantic satire Amen and the local goon movie Angamally Diaries.(more)

Actor Chemban Vinod Jose, who made a smashing writing debut with Angamaly Diaries, displays his acting versatility as Eeshi here. His deadpan heartbreak at his father�s sudden death is vastly removed from his villainous turn in the recent Swathanthriyam Ardharathriyil, or his menacing, spine-chilling appearance as a vengeful, lustful creep in 2016's Kali. (more)

He is brooding over something. His son Eeshi (a flawless Chemban Vinod Jose) make his father break his deep pensive silence with a glass of brandy. Vavachan recalls that his father had the grandest funeral that his village had ever seen. And that record apparently stands to date. He wants a spectacular funeral for himself. But can he with a bunch of banned Indian rupees which was his life's only saving? Of course, not. Eeshi promises Vavachan that he will make sure he gets a glorious send-off like a king with a pricey casket and music band leading a grand procession.(more)

Ee.Ma.Yau. serves its purpose by enabling some great storytelling. By finding laughter in morbid situations and social commentary in the unlikeliest of places, in the tradition of other fine funeral films, Pellissery fashions Ee.Ma.Yau. into a keenly observant, fabulously funny insight into the politics, economics and theatrics around death.(more)

A gripping movie, go for it!

Ee Ma Yau is a gripping movie that could rank among the finest films in Malayalam during recent times. Go for it!(more)

The film has an unmistakable vision and politics, but you will find no philosophical sermons. Nor does it indulge in any kind of pseudo aesthetics as the filmmaker easily navigates you through its capricious currents of mirth and sorrow. Pellissery also places motifs and metaphorical interludes in between thematic strands, creating a kind of allegorical mosaic. In a sense it�s the kind of slightly abstract art that invites you for a second perusal to decode it.(more) 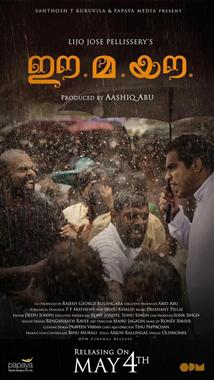