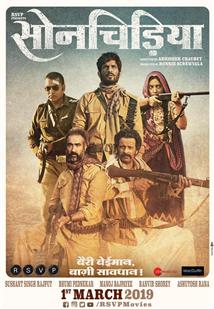 Abhishek Chaubey's Sonchiriya is a revelation in the sense how chase films are done in India. It is uncompromising, unstoppable and unpredictable in every minute of it.(more)

Gripping, tense and unpredictable, despite being a slow-burn western, Chaubey's period thriller makes for a riveting watch.

Do note, the Bundelkhand dialect is not everyone�s cup of tea so you will be forced to look at the English subtitles and that can be a tad distracting. However, the language gets easier to comprehend with time.(more)

As the cadences of the language and the flashes of black humour grow on us and the sound design hems us in - the silences that intersperse the gunfire and the musical score can be 'heard', and not just felt and experienced. The fluid camerawork and lighting capture both a sense of restlessness and and an air of foreboding as much in the dank, dark closed spaces as in the sunny exterior sequences. The balladic songs (music: Vishal Bhardwaj, lyrics: Varun Grover, voices: Rekha Bhardwaj, Sukhwinder Singh, Arijit Singh) extend solid support to a fabulous fable of a flawed land that eschews easy options and sticks to its guns all the way through.(more)

Sushant Singh Rajput and Ranvir Shorey are brilliant as bandits

Sonchiriya claims to be about a band of outlaws in wild search of a golden bird - but that bird may just be a goose. The film skims topics of caste, gender, religion and politics, and proves to be a film about the desperation to belong to something larger than oneself, the all-consuming desire to believe in something. Even birds of prey need to pray.(more)

Chaubey brings his expertise from Udta Punjab in beautifully using Sonchiriya (the golden bird) as a metaphor for salvation. A sonchiriya that everyone is looking for, but is unable to find. If you are looking for an interesting watch this weekend, Sonchiriya definitely deserves your time(more)

More a display of wonderful cinematography

bhishek Chaubey's very scenic Sonchiriya, tramping along those nooks and crevices of the Chambal, expending hundreds of bullets and quarts of spraying blood, made familiar by countless 'daaku' films of the 70s and 80s, almost always feels like a retread.(more)

A Masterpiece Offering From The Modern Bollywood!

All said and done, Sonchiriya takes, what Bandit Queen started, a level above. It maintains the �everyone crosses everyone� metaphor very smoothly. I lost the count of how many times I screamed �WOW� in awe of the powerful drama happening on screen.(more)

SONCHIRIYA is a well-made and a well shot movie with a strong narrative and brilliant performances as its USP.

There's too much of blood and violence but again, it's something that is required for a film of this genre. Rita Ghosh's production design is authentic. Divya and Nidhhi Ghambir's costumes are straight out of life and that-era. Shrikant Desai's make-up is spot=on. None of the actors look glamorous. Meghna Sen's editing is simple and unhurried. However, the flashback sequence in the second half is stretched and could have been shorter.(more)