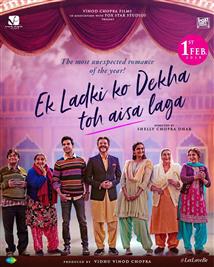 Funny how a woman can fall in love with another woman and still need a man to ensure she gets her happy ending. That's normal enough for Bollywood.(more)

Writer-director Shelly Chopra Dhar and co-writer Gazal Dhaliwal (who previously wrote Irrfan's 'Qarib Qarib Singlle') manage to spark off some pretty interesting ideas of love. Yes, their film deals with sexuality and seeking acceptance from the older and more-conservative family members, but at the core, 'ELKDTAL' talks about love being a universal feeling, one that cannot be shackled by societal norms and diktats. The writing isn�t all top-grade, but this film has its heart in the right place and sometimes that's all that really matters. (more)

Sonam, Anil Kapoor''s Film Is A Whiff Of Fresh Air With Daring Vision And Entertainment

Ek Ladki Ko Dekha... goads the audience to think differently without trying to deviate from its primary purpose, which is to deliver entertainment. It does the latter well enough and yet does not overly dilute its off-kilter vision. No mean feat that. (more)

The idea is brilliant, and ensemble solid. The two who stand out are Duhan as the brattish brother, and Cassandra, who shows spark. Pity about the flaccid writing which obscures the idea and the intent. What this film needed was more sharpness, more acuity, more honesty. It could then justifiably have been called '2019 : A Love Story'.(more)

Ek Ladki Ko Dekha Toh Aisa Laga is a precious film. It is an important film for the times we live in. It will not be a blockbuster. But it might just make you change the way you look at love. If you choose to let your 'dil' take precedence over your 'dimaag''. Sonam Kapoor and Anil Kapoor, along with writer Gazal Dhaliwal and director Shelly Chopra Dhar, deliver a brilliant lesbian love story that Bollywood should be proud of.(more)

EK LADKI KO DEKHA TOH AISA LAGA makes an important commentary on same-sex relationships in India and is embellished with some fine performances. But the narrative is very convenient to make any emotional impact.(more)

Anil Kapoor and Sonam Kapoor present an ode to acceptance

Ek Ladki Ko Dekhi Toh Aisa Laga concedes the unlikelihood of entertainment to change bigoted minds. When Sweety performs in Sahil's play, we see disgusted and intolerant audiences get up and leave. Yet I was struck by the image of an old man, sobbing as he leans on the empty bench in front of him, reserved for VIPs who have left. There will be plenty who leave their seats unconvinced, but this film will make some wonder - many of whom may never have considered it. This could have been a bolder and more explicit film, but sometimes cinema should work like a street play. Sometimes we need to preach beyond the choir.(more)

A warm ode to loving and living as we choose

The underrated Abhishek Duhan is impeccable as Sweety's brother. But the lasting memory from Ek Ladki Ko Dekha Toh Aisa Laga is of Anil taking a scene that could have been maudlin, insufferable and loud, and turning it into a heart-wrenching passage of acceptance, self-realisation and personal growth. Ek Veteran Ko Dekha Toh Aisa Laga...(more)

A False 'Brace For Impact'

Ek Ladki Ko Dekha Toh Aisa Laga is entertaining as a film but fails to live up to the huge promises made by the promos. A brave attempt and full marks for the implementation. The very strong supporting cast and uproarious dialogues keep you attracted towards it.(more)