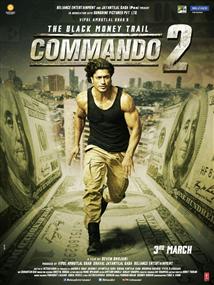 The blaring 'Commando commando' background during the action scenes is strikingly outdated. Overstretched and uninspiring, this film is reminiscent of a poor man's Abbas Mustan film. Even decent action cannot salvage this dreary supposed crime thriller.(more)

The film's impressive action scenes and pretty hero cannot compensate for its limited substance, which matters particularly because the action is not unrelenting. While Karan is bashing up baddies, it is hard to look away from the screen. When he is not, it becomes easy. Sadly, there is more to Jammwal than that face, body and his fighting skills. Someone give this man a more substantial film, please.(more)

Vidyut Jammwal is on black money trail. But where is the story?

The jaw-droppingly agile Jammwal does what is required, but he needs better stunts. The other men are good with their fists too, but why have such lame �firangi� baddies? As for the ladies, Gupta is made to narrow her eyes all the time, and Sharma who starts off quite funny as a shopaholic ditsy cop, becomes repetitive. And nothing can be worse for an out-and-out-actioner than to be shackled by sarkaari slogans.(more)

Commando 2 lacks heart and is all muscles. If may not even quench your thirst for some adrenaline-pumping stunts.(more)

Commando 2 does not explore a novel theme - it's the classic good vs evil - but the high-voltage action makes this an entertaining one for fans of the genre.(more)

Commando 2 does no justice to its name. It's a lackluster action film with remotely riveting story.(more)

COMMANDO 2 is a predictable entertainer that would appeal only to its target audience. At the Box-Office, it will do a fair business.(more)