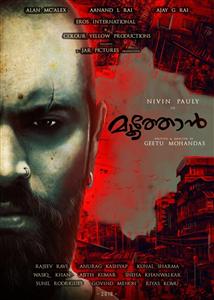 Geetu Mohandas's directorial MOOTHON is a tragic tale of a man who gives up on life and starts merely surviving. The love story that breathes beneath the rugged shell of blood and gore is heartwrenching, delicately real and makes the film to be remembered for years to come. (more)

Moothon is a brave film. And it is this gritty courage that brings about nothing less than the best in an artist. If you were a Nivin Pauly fan, watch Moothon for Nivin Pauly 2.0. But if it is the very craft of film-making that you enjoy, then watch it for the powerful story of self discovery.(more)

Moothon is a dark, visceral and atmospheric crime drama with stunning performances.

Moothon has its own share of strengths and flaws, but will surely leave an impression in you with its braveness and earnestness. Watch this Geetu Mohandas movie for the brilliant performances by Nivin Pauly and the rest of the cast.(more)

Geetu Mohandas' Drama Is Bumpy And Overstuffed, But With Passages Of Great Beauty And A Superb Nivin Pauly

One part of me wished this ambitious film had stuck to one story in one timeline, but in a strange way, this in-between mood is what makes the events stand out.(more)

Moothon is a film that stands out for its visceral emotional tapestry interwoven with action-thriller elements. Like a life fraught with questions and travails, it is a ride that can get bumpy, but it is one you should go on, should you get the chance.(more)

A brilliant film not to be missed

Moothon treads on an unconventional terrain for Malayalam and opens a fascinating world for the viewer. Don't miss this one!(more)

a brave statement from Geetu Mohandas

Moothon has enough depth in it for us to dive deep, and come back with material to ponder. Geetu Mohandas makes a brave statement with her first film in Malayalam.(more)

Nivin Pauly has passed with flying colours if his main aim was to gain credibility as a serious actor. The greasy face and filthy clothes that he has embraced in this film shows his commitment to cinema.(more)