The filmmaker�s prerogative to choose the style of narration and perhaps editor turned filmmaker Shree Narayan Singh felt that this was a safe route to take and/or something that he was comfortable with. But sadly it does not convert into a great viewing experience for the audience. A satirical dig at the core issue and keeping the momentum relatively lighter almost till the end perhaps might have helped, but what we instead get is a lot of heavy preaching.(more)

The first half is a little slow and overstretched but manages to sail through till the interval because of its comic punches. Despite all the positives, the length of the film is an issue.(more)

This Movie Will Make You Laugh, Feel & Think

irection by Shree Narayan Singh is not lofty but is just about good. It could�ve been done better. Screenplay looks very repetitive, thanks to some good moments which hide this flaw. Editing of the film too is not at par and it easily could�ve been a few minutes shorter. Some scenes just don�t make sense and do nothing but drag the plot.(more)

Akshay Kumar is a relevation. Since the past few years, he has been essaying some well-written parts but with TOILET - EK PREM KATHA, he goes on a high. The way he reacts in the aforementioned breakdown scene is going to stun viewers. Bhumi Pednekar gives a towering performance. She appears extremely confident and convincing. Divyendu Sharma (Naru) brings in comic relief and is wonderful as Akshay Kumar�s brother. Sudhir Pandey is perfect as the strict father who is imprisoned in the age-old customs that serve no purpose in today�s times. Anupam Kher (Jaya�s uncle) also raises laughs but his part is not a caricature. (more)

Shree Narayan Singh holds up a mirror to society, showing us how our superstitious villagers, lazy administration and corrupt politicians have actually converted India into the world�s largest shit-pond. Women especially, are treated more insensitively than cattle!(more)

Director Shree Narayan Singh moulds Akshay Kumar into a combination of Jolly LLB 2 and Khiladi 786. In short, Akshay is in comfort zone.(more)

Toilet: Ek Prem Katha is inspired by a true incident reported from Madhya Pradesh village a few years ago, but little that it offers by way of insight rings true. Some of the dialogues are cringe-worthy, the dramatic moments gratingly shrill, and the solutions utterly facile. The film harps constantly on the dignity of women, but its portrayal of the male protagonist's pursuit of the heroine appears to condone stalking. Keshav bumps into Jaya outside a train lavatory, develops a crush on her and begins to follow her around without as much as a by your leave. When the girl confronts him, he conveniently feigns a lack of interest in her and deletes her number from his phone and his own number from hers. Problematically, it's now the girl's turn to plead with him. (more)

Akshay Kumar�s paean to Modi and the potty

Director Shree Narayan Singh chose to soil his film with pro-government propaganda, because until the Modi spiel sneaks up on us in the second half, Toilet: Ek Prem Katha drives home an important � even if simplistically handled � point.(more) 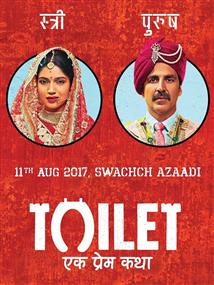