Triumph of the Good for Nothing Chap...Again

Writer Prasanna Kumar Bezawada and director Trinadha Rao Nakkina have strangely come up with a film that's outdated and also conveying a wrong message. This is not something that one expects people like Nani and Dil Raju to be supporting.(more)

Nenu Local is incredibly predictable. If not for Nani's comedy timing and skill to keep audiences glued to the seats, the movie would have had nothing much to offer. Set that aside, and it would border on boring. Nenu Local rides on Nani and nothing more. Watch it for him.(more)

On many occasions, you'd wonder why a girl would choose a guy who has little else apart from street smartness and a funny bone. In a scene where he takes her to his house for an impromptu meal with his parents, he shows her that little things matter. Well, but wouldn't you root for the hero even more if he put in some effort to make himself worthwhile?(more)

If you are in for the film, the climax is what makes the story more meaningful, in fact, the entire onus of the film lies on it. The triumph of love over everything is an expected ending but the way it is presented in Nenu Local makes it a remarkable finish.(more)

Nenu Local is a likable love story which is aimed at the youth and mass audience. Today's younger generation will surely connect to Nani's character and performance which is the biggest highlight of the film. If you ignore the routine story line and predictable proceedings, this film has decent fun, good songs and some light hearted entertainment which makes up for a good time pass watch this weekend.(more)

It's another hit for Nani

Nenu Local is a formula film but it gives the audience a bang for their buck (or paisa vasool, in local parlance). It's really Nani all the way; he carries the film on his shoulders with his energetic performance and entertaining skills. And it's certainly a good time for producer Dil Raju too; he is minting money with his recent hit Shathamanam Bhavanti, and Nenu Local looks all set to boost the producers revenues.(more) 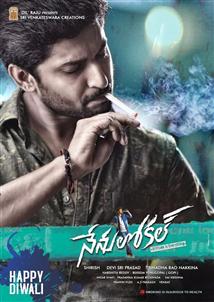