Feisty Alia, one of the better actors of the current generation, turns in a nicely nuanced performance. And SRK in his sober-avatar possessing infinite gyaan tempts you to seek out a therapist. If you�re in the mood to do some soul-searching this weekend, this film could do it for you.(more)

Given the potential of the theme�growing up pains, and walking past the past� and the attractive leads (both Bhatt and Khan work well together, she with her gamine grin which falters when she remembers something troubling, and he with his twinkly come-to-me-and-it-will-all-get-better vibe, making sure we notice how being grizzled becomes him), �Dear Zindagi� should have been a much better film. What we get instead, in spades, is bumper-sticker self-help notes which are strictly boiler-plate.(more)

SRK and Alia are to watch out for

"Genius is about knowing when to stop," says Jug in one of the film's best scenes. Maybe Gauri Shinde should have taken his advice and stopped before Dear Zindagi began taking a toll on people's patience. Watch the film for Alia Bhatt and Shah Rukh Khan. It's an emotional joyride which won't harm you when watched once.(more)

Shah Rukh Khan is charming but this life is unreal

If only Gauri brought better-etched characters and delved more into the emotional turmoils of her lead, this could have been a wonderful �slice-of-life� film with several messages to be lauded for. What she ends up with is a �could-have-been-amazing� film..(more)

Dear Zindagi meanders through many nothings to say something.

Dear Zindagi stretches unnecessarily and should have been wrapped up in two hours considering its content. A lot of portions in the first half could have been chopped off for this. (more)

Dear Zindagi pulls at the heartstrings. It is also loaded with genteel humour. But what works above all is that the pop philosophy/psychology that underlines the drama at the film's core isn't the least bit pulpy. Recommended without reservation.(more)

Dear Zindagi is a lovely picture, made with finesse and heart, and one that not only takes some stigma off the idea of seeking therapy, but -- in the most natural of ways -- goes a long way in making a viewer think of the people who matter most. The single smartest trick in this film, however, may well be the primary casting decision. Because a good therapist is a superstar.(more)

Dear Zindagi will definitely appeal to you if you love slice of life film. A little bit of trimming here and there would have been good, and it is not a typical Bollywood movie. However that shouldn�t stop you from not witnessing one of Alia�s best performances and SRK being his charming best(more)

DEAR ZINDAGI comes across as a slow-paced cerebral and contemporary slice of life tale about the challenges today�s generation of girls face in a rapidly shifting landscape. At the Box-Office, it will appeal only to a niche segment of the multiplex audience on account of lack of entertainment value as well as its abstruse and esoteric treatment. It will therefore find the going tough at the box office. (more) 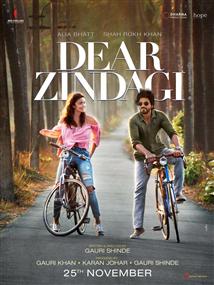