Puthiya Niyamam got clinched to a smooth and steady pace that finally raced towards an intensified and enhanced end. With no uninterrupted factors, the simple Writing aced very much above the known and familiar base could offer. Most of all the elements got well and worked together into presenting the Film much more than watchable. The composing befitting the disposition of the characters and the pace brought pushing grip. 3.5 stars for the harmonious work that added delighting betterment to the usual. (more)

The movie is a family entertainer and a thriller at the same time.Puthiya Niyamam is a great movie and a sure shot and is worth watching. The story happens in the life of an Adv. Louis Pothen (Mammooty) and dancer Vasuki (Nayanthara) . The inter caste couples were leading a peaceful life while some incidents changes everything.First half gives only glimpse of the story ahead.The major part of the story lies in second half which is full of twists and turns. Its been a while since malayalam movie got a story like this. The tension string of the movie is always kept tight as the story goes on. The climax is the best scene in the entire movie which breaks a huge suspense. Word of mouth publicity is already at its full speed as crowd started to rush in theatres. Mammooty is at his highest as he scored on every scene he appeared especially in the climax. The decision to dub herself will never make a regret in Nayantharas mind as it was perfect for her character. Nayanthara gave her best career performance as a paranoid mother (more) 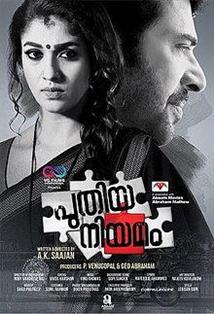