Baar Baar Dekho is about getting a chance of changing the mistakes in life without making them.

Baar Baar Dekho doesn't seek or give us substantiated answers on cosmic mysteries. Why Man does what he does, who is responsible for our actions -- sometimes horribly wrong - we don't know. Neither does the film. Director Nitya Mehra glides with a silent giggle and a sigh across a beautifully painted skyline of wistful thinking.(more)

he real problems in Mehra's film starts with its wavering pace. While the film revolves around the concept of time travel, our clock seems to slow down as a viewer in the first half. Also, in general, the film's long run time is slightly disappointing(more)

Sidharth-Katrina's film has guesswork at its core

In all, watch Baar Baar Dekho if you swear by the newer, fitter, leaner, hotter Katrina Kaif and her abs. There's nothing much to watch otherwise.(more)

Watch it once to smell the Bollywood masala

Baar Baar Dekho is hardly even a bird�s eye view of the new generation's choices and desires. Its philosophy lacks strength and gloss takes the centre stage right from the beginning. But, if you stop taking it seriously then it may provide you some happy moments in exchange. After all, who doesn't like a big, fat Punjabi wedding!(more)

What the film needed was to borrow some of the high voltage energy of the madly addictive Kala Chashma ditty, which has turned into the season's club song du jour. Baar baar dekho? Wishful thinking. Once is way more than enough.(more) 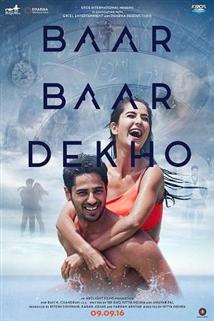