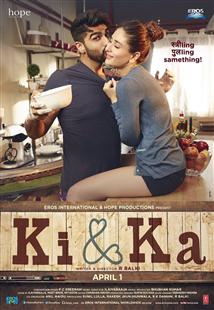 If you really want to watch this movie, you should be watch for it for its concept because the storyline will surely disappoint you(more)

Ki And Ka is a brave attempt to bring in the issue of a gender role reversal but the story fails to keep you engaged.

The film never reaches a conclusion of the concept and loses its focus. Despite the impressive performances by the leads, the movie simply disappoints.(more)

Kareena Kapoor Khan and Arjun Kapoor�s film is ABHIMAAN in a kitchen!

Arjun Kapoor proves that with a good role and a director he can pull off anything. Not making his Ka empathetic or a sorry figure he brings out the fine balance of anger and love to his role. Using subtlety and believing that less is more he gives us a convincing performance. Balki is able to create the right friction between his actors to bring out the drama of the sexes. Kareena�s final outburst is fantastic and also a sort of painful reminder of why we miss her so much on the large screen. Amitabh and Jaya�s cameo is a BIG surprise and the only scene that actually stays with you till the end. Loved how Balki for a moment made us believe we were actually in their living room!(more)

KI & KA is a cleverly crafted feel-good film that packs all the emotions.

Though it has strong performances by both Arjun and Kareena, the film is bound to draw extreme reactions from the orthodox audiences who may find the premise difficult to digest. It is an urban progressive film and should appeal more to women and young married couples.(more)

Ki and Ka is worth a ticket.

Kareena is terrific, Arjun, endearing. But Balki's writing is inconsistent. A few scenes leave you misty-eyed, but for the most part, the stock situations are banal. Yet, Ki and Ka is worth a ticket because it tells shows how there is nothing wrong with the man wearing the apron and the women wearing her ambition.(more)

With its promising premise undermined by erratic execution, Ki And Ka is only intermittently watchable.

Ki And Ka has prettified images (cinematographer: P.C. Sreeram) and a flawless ad-film veneer. Both tend to draw attention away from the travails of an unconventional marriage that the film wants the audience to focus on. All through the film, sundry characters, including Kia's widowed social activist-mother (Swaroop Sampat), allude to pillars that hold up buildings while talking about the institution of marriage. Too much talk and very little plot progression put the skids under the film. Ki And Ka goes belly up pretty quickly never to recover fully. (more)

A corporate robot�s love for too much drama

Too much breakfast and coffee table drama make this well intentioned film lose steam. Ki & Ka isn�t a strong voice against gender stereotyping, but it�s one of its kind in mainstream Hindi film industry, and that makes it notice-worthy.(more)

A liberal, fun concept helmed by Kareena, Arjun but spoilt by mixed messages

Large swathes of Ki & Ka are fun, considerable sections of it are unexpectedly broad-minded, path-breaking for Bollywood and insightful. The problem is that we can section it off in this fashion. Ultimately, what fails the film is its mixed messaging and choppy texture(more)

A special appearance by Amitabh and Jaya Bachchan, as themselves, even if gimmicky in nature, works as an amusing slice of celebrity life providing a catalyst during a stalemate in Ki & Ka�s. Ultimately, gender describes but doesn�t define a person. There�s no breakthrough in swapping roles. If anything, it only confirms how superficial the conflict is. At the end of 126 minutes, Ki & Ka figure this out too. But is there a need for definite roles at all is what it should be asking.(more)