Rich in performances, mediocre when it comes to story!

Rahul Dholakia after making movies like Parzania and Lamhaa has fallen trap to the commercial formula as he could have worked better on the storyline and the execution part of it. The first half is fast paced, engaging and strong whereas the second half slows down, lags as there is too much melodrama introduced in the act. Also, the climax is far too stretched which gives us the impression that the film could have been much tighter.(more)

Shah Rukh Khan plays the titular character of a spectacled goon who hates being called �battery�; he starts from harmless Ponzi schemes but graduates to pre-planned rackets and becomes the top bootlegger of his town. When ACP Majmudar (Nawazuddin Siddiqui) is posted in his area, he meets his equal. Raees forms a nexus with politicians who fuel his business, but he soon becomes the thorn in their side.(more)

Narcos squeezed into 3 hours, but no high moment in this Shah Rukh film

Raees is a typical �80s potboiler. Disturbingly, like commercial cinema from that period, the moral compass is a bit off. As Raees breaks up a political rally with flaming bottles of spirit, it sanctions violence. And it is borderline misogynistic, with the female lead (Mahira Khan) little more than a prop: a love interest he marries, keeps at home to bring up his child, and either yells at or romances(more)

Parzania and Lamhaa director Rahul Dholakia, Raees might be markedly unfamiliar territory, but he doesn't let that fact undermine the tangibility of the content and its context. The balance that he achieves lends the film sustained solidity. Dholakia keeps the action largely rooted in the chosen milieu while making way for ingredients aimed at upping the dramatic pitch.(more)

Raees is the quintessential commercial entertainer. It is to the credit of its director Rahul Dholakia (Parzania, Lamhaa) and its leading men Shah Rukh Khan and Nawazuddin Siddiqui that Raees is also so much more.(more)

Shah Rukh Khan's film is stuck between tamasha and restraint

Yes he is. But maybe we�ll be more aware of it the next time around, when he is not so wrapped in slo-mo advances, and lack-lustre song-and-dances.(more)

The movie can feel a bit long, but if you�re going for a great Shah Rukh performance and some good ol� popcorn-entertainment, it might just �raees� to the occasion.(more) 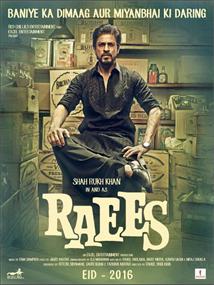