Everything is amplified. The jokes are louder, the music is more bass, the clothes have enough color to fill up a Holi scene, and there are enough slapstick situation and gags to last a season of a stand up comedy show.(more)

Prabhu Dheva's last film at the box-office was ACTION JACKSON, which did not fare well at the box-office. With SINGH IS BLIING however, he seems to have hit the right chord. Prabhu has packaged everything that is needed in a slapstick comedy aimed at the masses. (more)

Prabhudheva plays the old cards of showing a silly �Sardar�. I mean please aren�t we already beyond those jokes. Other than that he plays to stereotypes with the characters of Raftaar�s strict father. The lack of a logical plot leaves many loopholes in this story such as, a village-bred Raftaar not only not knowing English but also being unaware of the term �I Love You� which is practically impossible.(more)

Nothing is shining here

Akshay Kumar, who has a great comic timing otherwise, has been reduced to a mere loud-mouth. Most of his jokes fall flat. His dialogues are so predictable that you complete them even before he starts the sentence. Still, he is the most tolerable among all the actors, but clearly that's not enough. (more)

Everything about this Akshay Kumar starrer stoops low

The director's penchant for kinky-camp, which was on full display in 'Action Jackson', is a trifle muted this time around. It is saved for the long-haired baddie played by Kay Kay Menon, who gleefully hams it up, but loses impact at the blah line he�s given to repeat � 'I'm too good'.(more)

Singh is Bliing is director Prabhu Deva's first Hindi film that isn't a remake of a hit from down South. And it is his second film with Akshay after Rowdy Rathore. It is so atrociously bad that even Rowdy Rathore could be passed off as a masterpiece in comparison. Prabhu Deva would do well to stick to his staple rehashes: if nothing, he then has a semblance of a story to work with. (more) 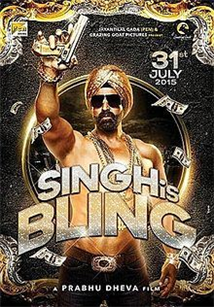