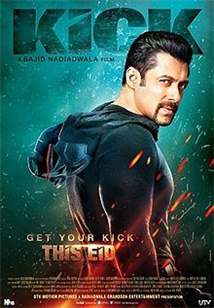 Director Sajid intelligently does not do much to the Telugu original this film is a remake of. Instead he concentrates on accentuating the star power of Salman.(more)

Whistle baja time bcoz this is a Bollywood fillum.

Salman-Jacquelines palpable chemistry and the high octane action pieces that are nothing short of brilliant. Nawazuddin is more fantastic than you expect him to be. If Salman is a superhero, Siddiqui is quite a supervillain. I wish there was more of him in the film.(more)

Kick is unimaginative and unoriginal

There are two devils in Kick. Both have sinister smiles. One of them, as the trailer tells us, is a thief named Devil (Salman Khan). The other one is in disguise. His name is Shiv (Nawazuddin Sidddiqui), a loony, over-the-top villain whose presence adds a much-needed kick to the film's proceedings. Siddiqui with his gaunt physique is the man least likely to take on Khan in a brawl and emerge victorious. So it's a relief to know that here he is the baddie with a brawn and a colourful personality who annoys the hero with his teasing talk and creepy laugh. (more)

An entertainer worth your time on the weekend

The story starts with Jacqueline Fernandez (Shaina) reminiscing about her ex-boyfriend Devi to Randeep Hooda, a man she has just met on her dad�s insistence, who happens to be a cop. In keeping with the traditional boy meets girl, girl hates boy, boy tries too hard, girl gives in, sequence, the Shaina and Devi fall in love. But Devi�s quest for kick makes it difficult for him to stick to one job and hence he keeps jumping from one thing to another, in the process straining relations with his girlfriend who is tired of his once-charming wayward ways.(more)

What this lovely word means is � unbearable�, though it cant come remotely close to the tedium that the original describes. Salman�s leading lady says it to him. About him. Yes, gasp, addressing the one and the only Sallu Bhai, who appears in his latest In and As avatar in �Kick�.(more)

Sajid conjures up a world that combines visual brilliance with several knockout episodes. Like Salman, Sajid too has a one-point agenda: Entertainment. No wonder, Sajid and his team of writers ensure that they need to offer more to the astute viewer than what has been witnessed thus far, since the promos have raised the bar and multiplied their expectations. That explains why the cat and mouse game [played between Randeep and Salman] doesn't follow the tried and tested rules, while the conflict between the Samaritan and the antagonist [Salman and Nawazuddin Siddiqui] steers clear of the conventional configuration. As a matter of fact, the frantic twists and turns in the storyline are proof that Sajid and his writing team are keen to offer the audience that extra dose of entertainment which would make KICK a kickass entertainer.(more)

The name of his character can be Devi Lal nee Devil (Kick), Chulbul Pandey (Dabbang and Dabbang 2), Radhe (Wanted), Lovely Singh (Bodyguard) or Tiger (Ek Tha Tiger), you see the star only as himself with the same hulking walk, same expressions, same dialogue delivery and same dance steps involving pelvic movements. His fans opine they want to see the star, not the actor. We are not arguing with that - the point here's that you see Salman as Salman, only the price of the film ticket may vary. - See more at: (more)

Kick provides a kick only sporadically.

To give the Devil his due, Kick isn�t half as bad as some of the Bollywood flicks that moviegoers have been subjected to in recent months. Kick is the directing debut of Sajid Nadiadwala, seasoned producer of money-spinning potboilers. It is no different from the films that his banner usually bankrolls. Kick revels in excess, which, for a film of its kind, is not necessarily a drawback. It dishes out everything in abundance. (more)