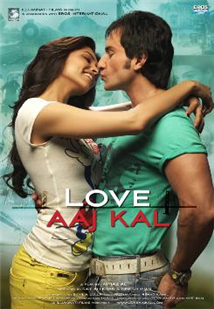 LOVE AAJ KAL is not an easy film to write and execute. Sure, it's a love story, but it's not one of those mundane love stories that talks of love and heartache. LOVE AAJ KAL is for the young and romantic at heart. Sure, it's not perfect, but the terrific performances, melodious music and stirring emotional moments [last 35 odd minutes] more than compensate for the hiccups.(more)

Chalo, let's get drunk with one more heady potion of Pyar, Imtiaz ishtyle, you tell yourself before sauntering in for his latest, Love Aaj Kal. The secret of director Imtiaz Ali's film making lies basically in three primordial areas. Instead of relying heavily on a three-hour long script, he chooses to concentrate on his dialogues: crisp, concise and completely in sync with aaj ka lingo(more)

With lilting music and characters you'll love, Imtiaz Ali brings out one of the most romantic films in recent times. It's a love story of the aam junta (mango people, as Jai translates), with a delicious contemporary edge. Go get your fill. (more)

Yet another love story. Okay, two.

Love Aaj Kal is a harmless, watchable film -- sad, because it could have been truly special. It has its moments in the first half, while the second half is an over-melodramatic drag. Or have I missed the point, and is Imtiaz making an incisive comment on the nature of Bollywood masala, saying be it today or yesterday, our romances stay as cheesy as they are breezy?(more)

The film in the end is ordinary stuff, watchable but never memorable like the director's previous efforts. It's like that plump mango you bite into only to discover it's not ripe yet. Watch it nevertheless for the sharp dialogue and some clever humor. (more)