Welcome Back is the sequel to the 2007 super-hit comedy reprising the star cast of Nana Patekar, Anil Kapoor and PareshRawal. The film also stars John Abraham, ShrutiHaasan, Naseeruddin Shah and Dimple Kapadia and is set to release this Friday the 4th.

Uday Shetty (Nana Patekar) and Majnu Bhai (Anil Kapoor) have left the underworld, and are now big businessmen. Two women, Chandni (Ankita Srivastava) and Maharani (Dimple Kapadia), enter their life. Chandni is the new love in Uday Shetty and Majnu's life and both friends dream of tying the knot with her. However, Appa(Naseer Shah) - Uday's father, plays spoilsport by bringing in his other daughter, Ranjana (ShrutiHaasan). He tells Uday Shetty to get her married to someone from a good family. Maharani puts a condition that only after her sister is married, will Chandni will marry one of them. Now, a search to find a suitable husband for Ranjana starts and entersAjju (John Abraham), the new school bhai and undiscovered son of Dr. Ghunghroo (PareshRawal) and the great comedy of errors and consusions starts thereafter.

The trio of these veteran actors will be the major reason one would go to the theaters to watch this movie. We all know how much fun Uday Bhai and Majnubhai guarantee the audience when they combine and tease Dr. Ghungroo.

John Abraham has a good run so far in comedy films like Garam Masala, Dostana and Welcome Back might be another successful venture in his pocket. It’s been almost two years since his last release but last film Madras Café was highly appreciated by the critics

The film also features the brilliance of actor Naseeruddin Shah as Wanted bhai, who is the king of all the dons. It will be interesting to watch him in the role similar to that of Feroz Khan’s RDX in the first.

The film also stars ShrutiHaasan as the female lead, Dimple Kapadia andAnkita Srivastava. Shiney Ahuja will be seen performing in the film too.

Who Are The People Behind? (Crew)

The film is directed by AneesBazmee who also directed its prequel. He has big movies like No Entry and Singh is King to his name and is considered one of the best directors in this genre. The film is produced by FirozNadiadwala and presented by Eros.

Will I Get To Groove? (Music)

Yes definitely. The songs are peppy and foot-tapping and will surely give you a good time when you’re on the dance floor especially ‘Tutte Bole Wedding Di’ by Meet bros. The film also has a revised version of the original quirky theme.

This film stands out from other comedies mainly due to the presence of the trio of Nana, Anil and Paresh reprising their roles from the original. Though the setting is the same as the first part but with a new story, this could be another joyride for the viewers. 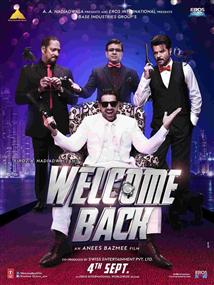