Tamil action thriller Kaithi (2019), written and directed by Lokesh Kanagaraj is being remade in Hindi as Bholaa and the film starring Ajay Devgn in the lead had its teaser release today. Bholaa is produced and directed by Ajay Devgn as well and the movie will be releasing in theaters in 3D on March 30, 2023 [Thursday].

Kaithi told the story of an ex-convict, who endeavours to meet his daughter for the first time after leaving prison. However, his attempts are interrupted due to the aftermath of a high profile drug raid. The story is said to be inspired by a real life ex-convict named Rajiv Ranjan. In Tamil, this film also lead to the formation of Lokesh Cinematic Universe, with Kamal Haasan's Vikram (2022) being the second film in the LCU.

The technical crew of this film also includes Ravi Basrur for music, Aseem Bajaj for cinematography, Ramazan Bulut and R.P. Yadav for action and Dharmendra Sharma for edits. 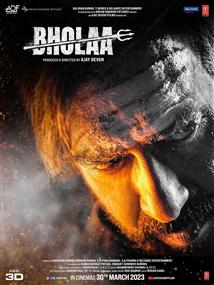