Pathaan is a high octane action thriller with story and direction by Siddharth Anand and screenplay by Shridhar Raghavan. The movie marks the return of Bollywood star Shah Rukh Khan to the big screen after 4 years, and marking his 57th birthday on November 2, 2022, the teaser of Pathaan was unveiled. Not only was Shah Rukh (also known as SRK) doing some heavy duty stunts like never before, he was also flying a jet-pack, giving his fans a taste of the super-hero swag one usually finds in Hollywood movies.

Film's female lead Deepika Padukone had some impressive acrobatic stunts as well. Yash Raj Films, producer of the movie updated by evening that the video was trending at No: 1 on YouTube. Pathaan releases on January 25, 2022 for the Republic day weekend in Hindi, Tamil (dubbed) and Telugu (dubbed).

The film also stars John Abraham as the villain, and in the teaser he was seen going head to head with the secret agent Shah Rukh Khan in several of the scenes.

3...2...1... BOOM! #PathaanTeaser trending on #1 on @YouTube
Watch the teaser - https://t.co/SbwQ5adEPP
Celebrate #Pathaan with #YRF50 only at a big screen near you on 25th January, 2023. Releasing in Hindi, Tamil and Telugu. pic.twitter.com/SUCUIvBZfz 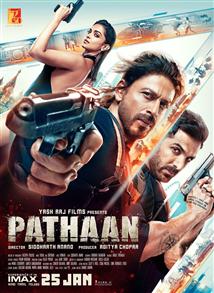