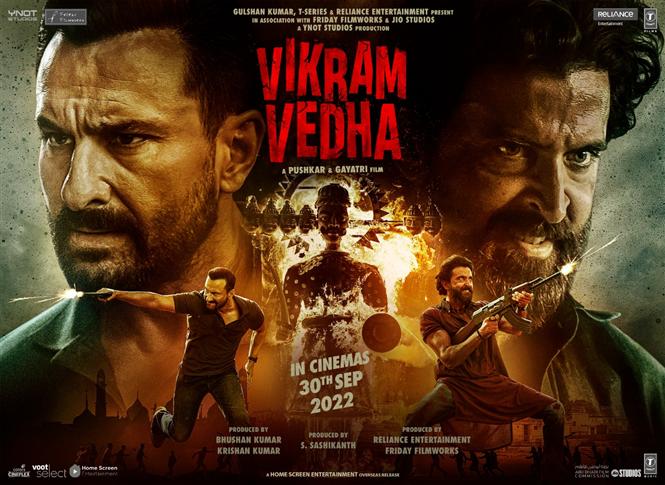 Introduction:  Vikram Vedha is an official Hindi remake of the 2017 blockbuster Tamil film of the same name. The same filmmaker duo Pushkar and Gayathri have directed this flick too. Hrithik Roshan and Saif Ali Khan are replacing the roles of Vijay Sethupathi and Madhavan respectively here.

Hrithik Roshan, a notorious gangster wantedly surrenders to the Police who are trying to encounter him. He starts his game with the honest cop Saif Ali Khan by confronting him for a false encounter. The mystery unfolds in the Vikramadithyan and Vedalam story pattern.

The director duo have cleverly worked on this film by knowing the appealing quality of the original version. They haven’t changed much, apart from a couple of minute changes here and there, the screenplay is the same. It literally feels like the same movie has been reshot with different actors at different locations. But Vikram Vedha’s screenplay is one of the finest pieces out there, so the engagement is mostly on. The thin story that is worth multiple viewing due to its superlative twisted storytelling. The lows and highs were perfectly balanced, the confrontation scenes were powerful. Dips at the second flashback which felt like quite extensively shown here, it had some dull moments. For a person who has already seen the original, there’s nothing new to be offered here, but if you loved it, this is going to be liked too. And, it’s going to be a thoroughly exciting guessing game for a first time viewer. The twists are assembled and presented in such a way that one should have a logical attachment with the narrative as well. The emotional connect is very much alive that drives the film, the relationship of the brothers for Hrithik that carries for the most part and the friendly bond for Saif towards the end. The mass one-on-one scenes are a blast that excite the audience at regular gaps. The climax is a feast for all, taking the star liberty and spicing it up with more masala clicks big time here.

Because of the impact of its original, there was an initial mind block, but once the mood kicks-off, there’s no stopping in admiring the performances. Saif Ali Khan is very focused throughout, although he doesn’t show much variation, he stays truthful to his role. Hrithik Roshan is the show-stealer, dynamic expressions with cunning attitude, walking style and his steps in the dance number are attractive. There is an undercurrent chemistry that’s going on between the two male leads that peaks at the climax for some crowd erupting heroic shots. Radhika Apte gets a sensible middle-woman role amidst the bunch of supporting artists. The other casting choices are apt for the film too, nothing much to complain about the performances.

Songs are average except for the theme song that is retained from the original. Background score elevates the tempo of the flick, same tunes but nothing could match the level of intensity it provides to the visuals. Pretty good camera work, the swag of Hrithik Roshan is captured nicely and the slow motion shots at the end are paisa-vasool. Neat editing except for the fact that they could have shortened the initial portions of the second half. Solid stunt choreography, played to the strengths of the actors, set in such a way that fans would go gaga.

A picture-to-picture remake of the original apart from adding more masala to the climax. Still a fantastic gripping mystery tale narrated superbly, the actors contribute well powered by a bang-on score. 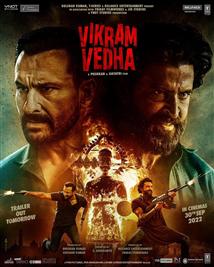