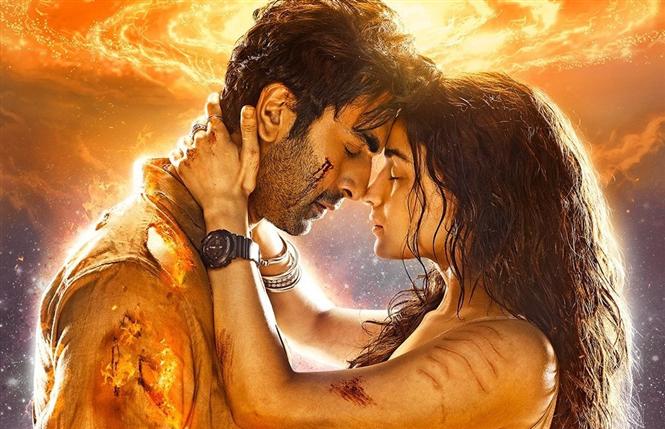 Brahmastra is a mythological fantasy trilogy and part 1 is named Shiva. The film stars Ranbir Kapoor, Alia Bhatt, Mouni Roy and Amitabh Bachchan in the lead roles. And has cameos by Shah Rukh Khan and Nagarjuna Akkineni.
Premise Three highly precious stones form the Brahmastra, which are protected by three efficient super-people with Astra powers. The menacing ‘Dev’ tries to capture them to rule the world. How Ranbir Kapoor is linked to this and how he manages to save the day forms the crux of the story.
Writing/ Direction The mythological story is solid, good that they were split and conveyed as parts at frequent intervals of the movie, neatly narrated with either live action or animated visuals. The purpose for the cameos are very much justifying, the big artists were not brought together to make it a star-stubbed circus. The interval block sets the mood for the second half that was utilized well in the final forty minutes. The lead given in the end to the second part is meaningful and creates curiosity. There are excessive romantic scenes throughout, the worst part is that the love track is terrible. There is a reason the film concludes saying ‘Love Unites The World Despite Diversities’, but there is a way to present them right. And, it’s hard to digest that Ayan Mukherji, the director who made two beautiful movies in the romance genre has done this to himself. There is a sense of relief when the heroine leaves the hero, but they don’t leave it like that as they talk over phone calls and in fact the heroine knocks the hero’s dream as well. His vision is appreciable, but the screenplay is unfortunately underwhelming. Uninteresting storytelling that is way too predictable, very straightforward without any twists and turns. The flow is boring without any high points or moments to get excited for. Also, the Tamil version makes the experience restless, dialogues are very amateurish and the dubbing voice for the female lead is a complete misfit.
Performances Ranbir Kapoor fits his part well, he has carried the superficial sequences effortlessly and has made them look believable. Alia Bhatt is as usual an eye-candy, but her role is that age-old cringe love interest one. Both the stellar performers have no scope to act or delightful scenes to develop their on-screen chemistry. Amitabh Bachchan gets an important role, he comes for the entire final hour and has tried his best to uplift the momentum. Mouni Roy’s look is apt for her negative role, but the acting is very abstract. Shah Rukh Khan’s cameo is likeable, the man has enjoyed and played his part which is in the witty tone. Nagarjuna Akkineni’s cameo takes the story forward just before the break-point, he has maintained that focused and serious attitude. But however, none of the characters are written that well that’s worth mentioning. The drama is extremely weak, in fact it feels like there’s none.
Technicalities Pritam’s songs are light-hearted and pretty decent, the vocals in Tamil are appealing. Satisfactory background score, the stuff is quite repetitive but somehow gels with the situations. Extraordinary visuals, every frame is like a poster, beautiful colour tone, the lighting team, DI department, etc have put in their utmost efforts which is evident on the big-screen. A new achievement in VFX quality, zero complaints with special effects and it naturally elevates the visual presentation. Editing could’ve been crisper, the overly runtime of around 165 minutes is a huge letdown as the pace is nowhere racy. Decent 3D experience, not great but definitely not bad too.
Bottomline Despite the subject being rare, it ends up as a regular commercial potboiler with no substance. Anticipated to be the biggest comeback film for Bollywood, but it’s yet another disappointment. What’s scary is that it's a messy start to the trilogy.
Brahmastra Part 1: Shiva - Visually Stunning, Is That Enough?
Rating - 2.5/ 5