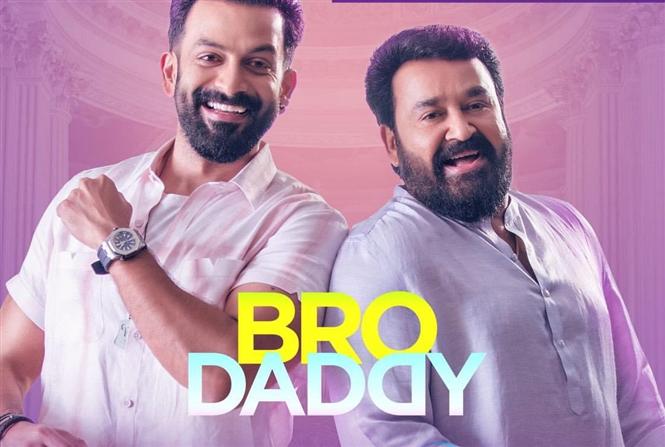 Bro Daddy - A glossy looking film that is adequately funny!

Bro Daddy is a situational comedy involving two families. Eesho John Kattadi (Prithviraj) is the only son of John Chacko Kattadi (Mohanlal) and Anna (Meena) and is working for an advertising agency in Bangalore. Anna (Kalyani) is the only daughter of Kurian (Lalu Alex) and Elsy (Kaniha) and is an IT employee who works in Bangalore too. The elder generation of the two families share a close bond that involves more than one equation (That both Meena and Kalyani are both named Anna could give you a clue about one equation). But Eesho and the younger Anna do not seem to be fond of each other or that is how things are shown to us at the beginning. But they are hiding a secret and a development in the plot ensures that they cannot keep it hidden any longer. Eesho decides to confess to his father, only to realize that he is at the receiving end of a confession from his father! As you can see, there is sufficient juice in the plot of Bro Daddy for a situational comedy.

After the not so spectacular initial twenty minutes, the film does really take off with an important reveal. From thereon, something interesting keeps happening at regular intervals to keep you smiling till the end of the film. The actors keep it simple and this works for the film in a way. On the one hand, you feel that a little more over-the-top antics from the actors might have made the film a lot funnier but this could also backfire when the jokes don’t work. The track involving Shoubin is an ideal example. It is over the top and should have been a riot. But something is lost in translation and you are left only with a chuckle or two. Contrast this with the rest of the film and you realize that the decision to keep the meter low key is a smart one. While this might rob the film of laugh out loud moments, it ensures that you are hardly disappointed during any stretch of the film and there is a constant grin in your face with small jokes sprinkled right through. But I did wish there were more jokes, like the running gag involving the expertise of the younger Anna in making delicious coffee. The film gets its emotions right in the final act when the focus shifts to Kurian and Lalu Alex does well in that scene on a rooftop bar. The small twist in the climax scene involving the advertising agency angle is also nicely done.

Not sure if it has to do anything with the advertising angle but I felt that the film looked too glossy and clean all the time. The kind of look and feel we get in those ads of wall paints or newly built apartments and villas. It might have to do with the fact that the two families shown in the film are well off. But such crystal-clear tidiness and glossy appearance (including the make-up) throughout the film feels a little artificial.

Bro Daddy isn’t a rib-tickling affair but is a sufficiently funny film that delivers the goods. 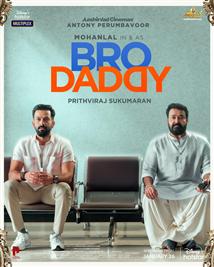