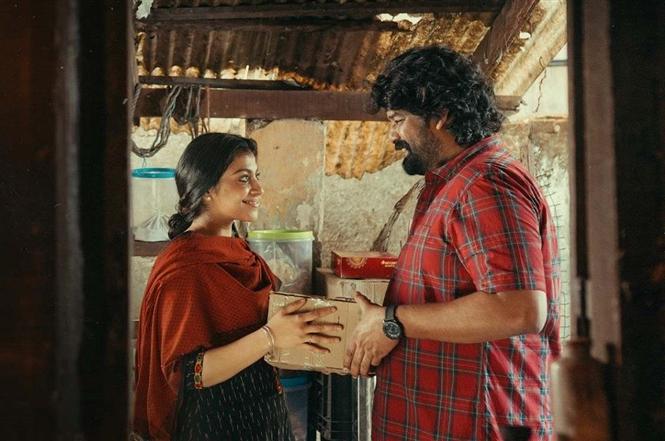 Madhuram is the kind of feel-good film that Malayalam cinema is so adept at delivering time and again. Ahammed Khabeer builds this sweet film around a premise that would usually be reserved for a serious film or even a tragedy in most cases. A group of people, who are bystanders for their family members admitted in a government hospital in Kochi, forge a bond and Madhuram is about their lives and how their interactions have a positive influence on each other. These characters are carefully chosen to represent different generations and they come from different religious backgrounds as well.

Sabu (Joju George) isn’t really the protagonist of Madhuram but he is at the centre of this film. He is the fulcrum around whom the bonding among the members in the common room of the hospital happens. The elderly Ravi (Indrans) is there to look after his wife Sulekha. The younger Kevin (Arjun Ashokan) who is experiencing a troubled marriage is there to look after his mother and a much younger Thajudeen (Fahim Safar) is there to look after his father. These individuals almost become a family of sorts pulling each other’s legs and standing by each other in their difficult moments. Sabu behaves like the head of this family, caring for them and helping them take important decisions.

How much you enjoy or relate to Madhuram would depend a lot on how you see the film. It does seem like it has as an overdose of sweetness. It does seem that it manipulates us by having a very soothing kind of music playing in the background of emotional scenes to give a feel-good kind of a vibe. But think of it and this might precisely be what the film wants to convey. There is a dialogue in the film spoken by a character (played by Lal) where he tells Sabu that life isn’t only about the joyful moments and he has to ‘live’ his life with all its ups and downs. Maybe Madhuram is asking everyone to look for sweetness not only in the joyful moments but also during the challenging times.

Throughout the film there is emphasis on the need to stand by others during their tough times. This becomes all the more apparent when Kevin’s moral support goes a long way in helping Sabu. Kevin is this introverted and a not so independent guy who finds it difficult to take decisions and is quite confused most of the times. Sabu is at the opposite end of the spectrum and is someone who moves around like a boss. But towards the film’s climax, Kevin’s presence helps Sabu a great deal.

The romance between Sabu and Chitra (Shruti Ramachandran) really works despite being generic. Both Joju George and Shruti are very good and make us buy into this romance. The cutesy moments might look straight out of a teenage romance but we have two grown up adults here. It certainly is a sight to see Joju George play the lover boy and squirm with shyness. Indrans is superb as well and the performances all around are neat.

A simple and beautiful film that is overloaded with sweetness.