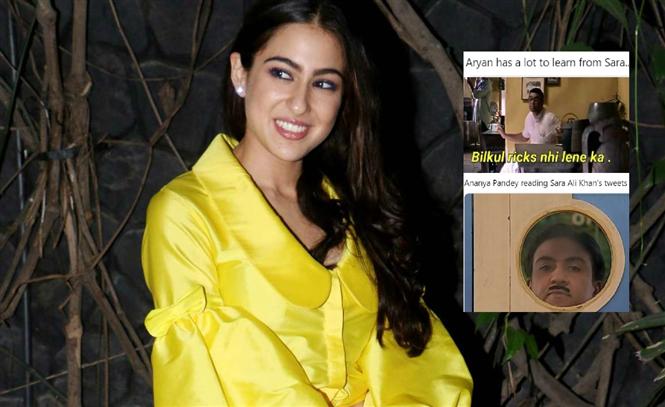 Ever since BJP came to power, not everything has been smooth between the political party and the Hindi film industry aka Bollywood. From attacks on movies to party allies openly threatening stars to targetted image maligning - those who follow films and otherwise have witnessed everything.

Not too long ago, emerging star Sara Ali Khan, daughter of actor Saif Ali Khan and yesteryear actress Amritha Singh was embroiled in a drug-chat controversy, for which the Narcotics Control Bureau (NCB) had summoned her. At that time, while rest of the senior actresses were let go on grounds of complete co-operation, Sara's name was making news for non-cooperation.

Nevertheless she continued to make movies and public appearances since nothing legally bound her from not doing so. At a time when star kids like Aryan Khan and Ananya Panday are in the news again for being busted by the NCB, Sara Ali Khan seems to have made a Twitter account for herself (verified and all) and the nature of these tweets, is what has caught the attention of many.

Very uncharacteristic to her usual social media handles, Sara Ali Khan's twitter bio reads, "Indian Woman" in Hindi, has a display picture in a saree and mostly follows only BJP related accounts. Tweets too seem to be only pro-government related but what triggered such an intense interest (and a little trolling) today was the account's birthday wish for home minister Amit Shah.

She is following 10 very interesting accounts till now pic.twitter.com/USLVs9ZbSy