Marking the auspicious occasion of Ugadi (Telugu New Year), director S.S. Rajamouli has unveiled a motion poster for his upcoming period movie RRR. The video was unveiled with the caption, "Water douses fire! Fire evaporates water! And the two forces come together with immense energy... to present the title logo of #RRR!!!" and the official handle of the film added, "When the powers of opposing forces like fire and water come together, intense energy is what you'll have!"

It has also been revealed that RRR, which is set in the 1920 pre-independence era and stars Ram Charan, NTR, Ajay Devgn and Alia Bhatt among others will be releasing on January 8, 2021. The film is produced by DVV Entertainment. 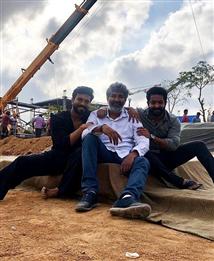