Haathi Mere Saathi Teaser: Rana Daggubati is set out to save the forest and animals

The teaser of 'Haathi Mere Saathi' has been unveiled by the makers. The film stars Rana Daggubati, Pulkit Samrat, Vishnu Vishal, Zoya Hussain, Shriya Pilgaonkar in the lead roles. Touted to be a wildlife drama, Rana Daggubati, Pulkit Samrat, who share a deep bonding with the animals in the forest are set out on a battle to save the jungle. The teaser with breathtaking visuals of the forest looks promising.

Directed by Prabhu Solomon, the film produced by Eros International has music by Shantanu Moitra. Haathi Mere Saathi is a trilingual film made simultaneously in Hindi, Tamil (Kaadan) and Telugu (Aranya). The film is set to hit the screens on April 2, 2020. 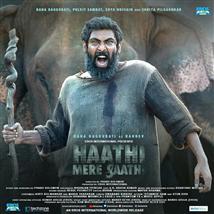