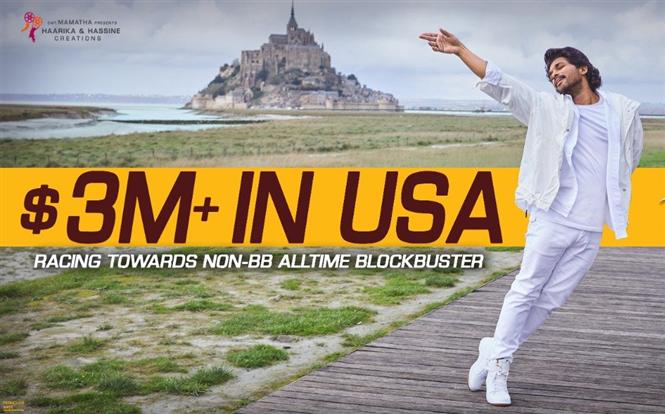 Allu Arjun who is basking in the success of his latest outing Ala Vaikunthapurramuloo directed by TriVikram has yet another reason to rejoice as the film has entered the coveted $3 million club. This is the first time his film has grossed over $3M in USA. It is a huge feat as the film which hit  the screens for Sankranthi on January 12 faced stiff competition from Mahesh Babu's 'Sarileru Neekevvaru' and Rajinikanth's Darbar.

Ala Vaikunthapurramuloo has been doing phenomenal business ever since its release with the festive season being a big boost to the film's collection. Allu Arjun starrer 'Race Gurram' which minted $1.3 million in USA held the record for the highest grossing film of his career. Ala Vaikunthapurramuloo has joined the likes of Ram Charan's Rangasthalam, Mahesh Babu's Bharat Ane Nenu and Prabhas' Saaho which are already part of $3MN club. Baahubali 1 and 2 hold the top 2 spots with a highest ever gross of $20 million and $6.8 million respectively in USA.

Here's the list of South Indian movies which have crossed $3Mn mark in USA: