Superstar Mahesh Babu starrer Sarileru Neekevvaru is one of the most awaited films in Tollywood. The first song from the film titled 'Mind Block' has been released the makers. The track sung by Blaaze and Ranina Reddy has been penned by Mani and Devi Sri Prasad who has scored the music as well. The film has five songs and the makers have planned to release each song every Monday for 5 weeks.

Mahesh Babu is essaying the role of Major Ajay Krishna. The film will see Mahesh don the military uniform for the first time in his career. Sarileru Neekevvaru is set to release for Sankranthi 2020. Rashmika Mandanna plays the leading lady opposite Mahesh Babu. Yesteryear actress Vijayashanti is set to make a comeback to the big screen with Sarileru Neekevvaru. Ramya Krishnan, Rajendra Prasad, Rao Ramesh and Prakash Raj are also part of the cast. Directed by Anil Ravipudi, the film is jointly produced by AK Entertainments, GMB Entertainments and Sri Venkateswara Creations. 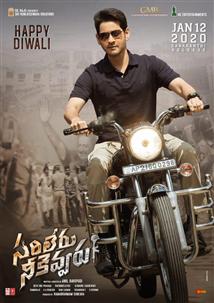