Following consecutive success of movies as actor, Vijay Devarakonda kick-starts his production venture through the movie ‘Meeku Maathrame Cheptha’. The film’s trailer was unveiled by Mahesh Babu few minutes ago. With a running length of 1 minute 53 seconds, the trailer establishes the multiple characters in the film and a fun and serious drama blended. 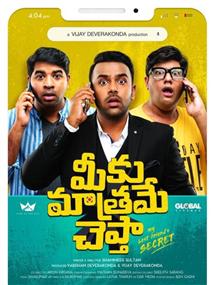