The Sky is Pink Review - A Mellow, Moving Tale of Life 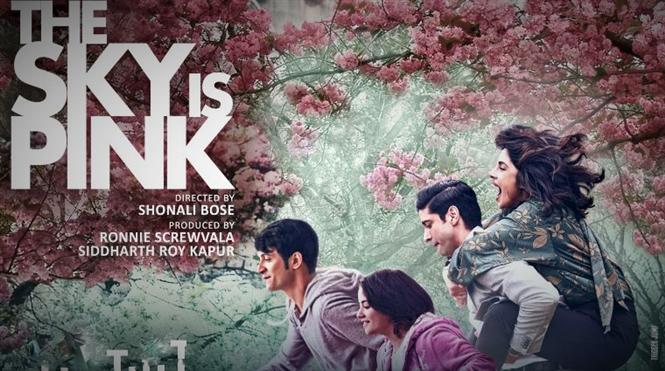 The Sky is Pink Review - A Mellow, Moving Tale of Life

The word to describe Shonali Bose's directorial 'The Sky is Pink' is 'mellow'. The film adsorbs in its mood of patience, care, rehab and coming face to face with reality. Its inspired from a real life story of a mother who stood against all the odds of life to save her daughter.

Priyanka Chopra shines in her role as a super mother. She wipes off the melodrama with her range. Be it the supportive traits she portray or the vulnerability she outbursts when her one dream to make her daughter survive collapses.. she is brilliant! The psychotic breakdown her character undergoes works big time because of the miniscule efforts she takes in building up the character's mood graph to that point!

Farhan Akthar impresses with a short-tempered yet helpless husband who suffers between what he wants and what's out there. The chemistry here is more of a companionship and the duo putforth a beautiful job in bringing out the intimacy the couple share! Rohit Sharaf who plays Aisha's brother is a charm! He brings a vibrance to the film and balances out for all the darkness it travels in!
Zaira Wasim plays Aisha, the deceased daughter suffering with terminal disorders one after the other. The portrayal comes bookish but what makes up for it is the mood that surrounds the film! The ambience emits a sense of tragedy and it is what that keeps us hooked to the 'how' than the 'what'.
Where the film outlooks is when the setup keeps getting increasingly sophisticated. The tale happens in villas of London & New Delhi. The financial stability is checked green. The only factor to be concerned about is the emotional arc. Somehow I felt that Shoojit Sircar's October did a much more better outing in the theme than this. And the main reason for that is how much we could relate the characters and the victim to ourselves. Here, despite the most genuine performances of Farhan and Priyanka, the roles stand elite!
Pritam's score spells a vibe. The cinematography in pastel tinted tone by Kartik Vijay and Nick Cooke narrates the mood as much as possible. Manas Mittal's editing that keeps to and fro between the past and present is novelistically done. The transformations in the looks of the actors also come up very much convincing.
I wish the story of Aisha is told through her performances as much as we hear her. Since for almost one half of the film, we don't get to see her (we see her as a child, a kid etc..).. it feels bit odd to empathize with her sufferings in the death bed. We didn't have enough screentime with her to connect. And, for the title, as much as it is beautiful and metaphorical.. I wonder why they made that scene with the brother to ask 'Why can't the sky be pink?'. Why not make Aisha ask that? Yes! May be.. it happened that way in real life.. but why not take the cinematic license here? But, nevertheless.. the film holds a scent of longing! One that's rare to come out from Bollywood!
Bottomline
Shonali Bose's 'The Sky is Pink' starring Priyanka Chopra, Farhan Akthar and Zaira Wasim is a moving tale of a family, quietly going through a destruction! Priyanka shines in this film in a role that seeds hope even in the darkest hours of reality!
Rating : 3/5 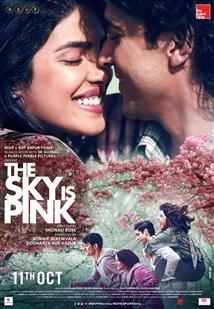