WAR Review - An Exhaustingly Made Disaster 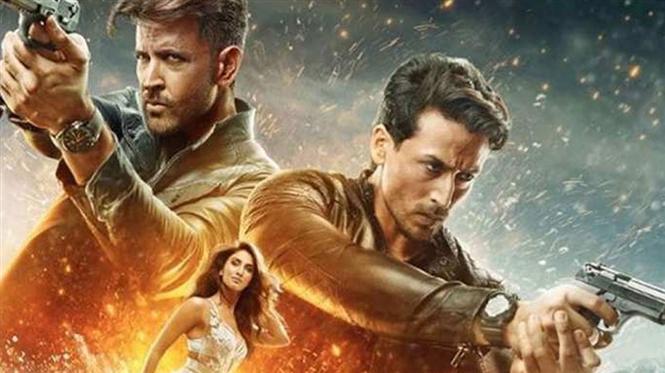 'War' directed by Siddharth Anand is without a blink, the most consistently stupidest of films that I have ever seen. It is not just that that the film is a mindless entertainer (?!) But it is a solid testimony to the fact that how a no-brainer project with zero logic and reasoning is still being green lighted in Bollywood for the sake of stars in it.

The film is about a secret agent Kabir's mission to save India from the terrorists. And he is ridiculously conscious about it. He drives, rides, runs, flies, swims, jumps to do that. The threat has no face or flavour to it except that it is from people who are Muslim. From start to finish.. the film keeps listing out random Muslim names as national threats and terrorists. At one scene, while sending a missile, one of the villains ask to utter 'Bismillah' and send it. After a point, even the 'on-the-face' pretentious effort to keep few good characters as Muslim too vanishes.
Throughout the film, Hrithik Roshan and Tiger Shroff walk across as gym hunks whose skin is custom made to bear the deadliest of bullets and knifes. Almost after every terrifying attack where on an average 5-6 bullets tear them apart.. they appear on the very next scene filtered as freshly dispatched apples.
The film crosses its line of logic when Hrithik Roshan jumps from a running plane to another plane by holding a wing of it with a magnet glove. He opens the door of that plane and in that high pressure air flow, he fights. And shoots handful of innocent soldiers for god no why. And at the end, takes a jeep inside the plane, jumps out and come out of the jeep in a parachute. Yes! I am not making it up. This is exactly how it happened.
And to topple this all.. there is an angle of plastic surgery in the film. A top class plastic surgeon who can only be afforded by multimillionaires perform a face transplant surgery to change the chief of terrorist's face to one of his trustable henchman. And much later we are told that it was transplanted as Tiger Shroff's face and hence the Tiger Shroff we have been rooting for since the beginning of the film is now dead and just his face is being transplanted to the antagonist. Can it get anymore stoner?
The climax where all this zigzagging back stories and nonsensical twists should culminate is set in middle of Arctic Ocean where a missile to destroy the satellite that controls India's defense is being launched. Hrithik appears there (too) right out of nowhere (yes, after being just poisoned and made to drown by Tiger in the previous scene) and fights them all. He miraculously controls the missile to miss the target but return back to where it was launched from. And when there is just two seconds for the missile to hit.. just two freaking seconds.. he takes a snow rider car and gets out. Whoo!
After loads and loads of the exotic locations of some random country where they have shot the entire film for the low subsidy, discount or whatever.. pathetic songs like one where these two dance amidst Holi powders being thrashed left, right and center.. a wannabe emotional hook that couldn't just work with the heroine's character.. finally.. the climax hits!
And after another shirt ripping fight between the hunks, the film does end once for all with awards and rewards to Tiger's character. Also, at the end, there is a hook to tell us how Kabir will keep on working on such missions as secret agent. But by then, we are exhausted beyond explanations.
Bottomline: 'War' directed by Siddharth Anand, starring Hrithik Roshan and Tiger Shroff, is your mindless high concept, high budget Bollywood action film where everything is lavishly shot and shown to pump up high dosage of nationalisms but falls disastrously flat and funny as the writing goes ridiculously mayhem! 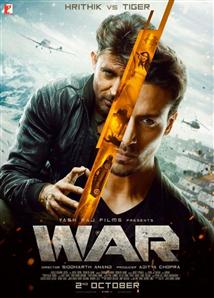