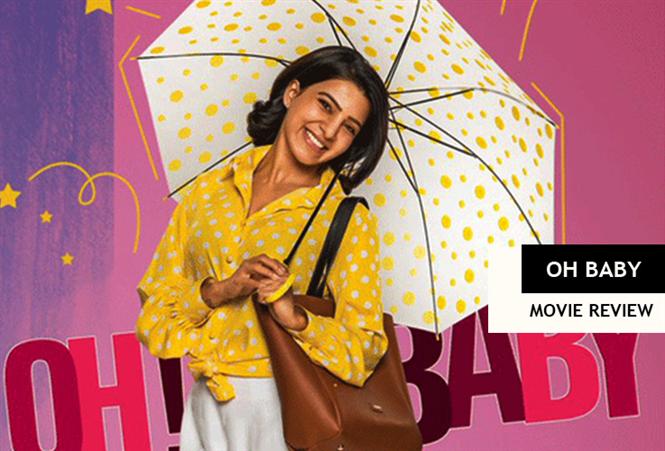 In an industry where heroes go blazing with style and mass elements, light-hearted feel good dramas are few and far between. It's only when somebody decides to break the shackles and come out and do a fun film do things turn for the better, and it has happened once again with Samantha's new release in Oh Baby. Right from the start to the finish, the film is a charming entertainer that gets most of its things right.

Oh Baby is bent on a mysterious incident where a troubled elderly woman gains back her youthful days after getting her photo taken at a studio. The resulting events that follow make her family realize her importance, and also bring us some lovely moments all along the way.

The best thing about the film is the way in which it balances its comedy and its emotional quotient, and does not lose out fizz completely at any point. After establishing the plot in the first thirty minutes through Lakshmi's (Savitri) character, proceedings take a completely comic turn when Samantha (Swathi) enters the scene. Nandini Reddy remembers where to draw the line when it comes to not letting her narrative stray away to the melodramatic zone. Despite the fantasy angle, the film stays rooted and is very accessible to any kind of viewer amidst the audiences.

Easily, Oh Baby stands up as one of Samantha's better performances in her career. It is quite a different pick at this point, standing in stark contrast to the films that she has been doing off late. Samantha rules the roost in the comic portions with her incredible timing, which is definitely a surprise as we haven't seen her in that quarter much. She also proves her mettle by matching up to the accent and the body language of Lakshmi's character, which makes the film all the more believable. It is a minimum guarantee that you will laugh out loud for at least 7-8 scenes in the film, which itself makes it worth a watch. Apart from Samantha, it is veteran actress Lakshmi who is largely impressive even though she has only about 40 minutes of screen time. The entire supporting cast are apt to the story, making it an added advantage.

Despite all the positives, Oh Baby could have done with some trimming in the second half, especially in the portions involving Naga Shourya as his arc is predictable and foreseen. The songs too, don't live up to the worth of the film, as it is a half-musical. These are some hurdles which could have been avoided with some fine-tuning at the early stages.

Nevertheless, Oh Baby comes off as a delightful feel good film that will put a smile on your face. Two talented women have got together to make something special, and the end result is surely satisfying.