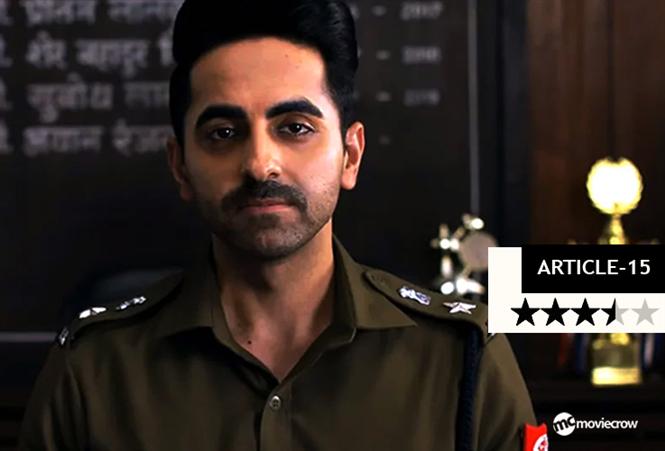 There’s a particularly important segment in Anubhav Sinha’s latest film Article 15 where we find Jatav (Kumud Mishra) and Bhramadatt (Manoj Pahwa) having a heated exchange of sorts. Bhramadatt is appalled to see his subordinate Jatav opening up to his superior officer, Ayan Ranjan (Ayushmann Khurrana) and giving him more than adequate information. He makes his frustration very clear and demands to know why Jatav is pandering to the orders of Ayan despite knowing that people like Ayan wouldn’t remain there for too long unlike Jatav and Bhramadatt who have lived their whole lives there. Jatav is clearly upset and hurt but is quick to retort that he had no choice but to respond to Ayan’s queries. He also points out his frustration of having to be in this position and reminds Bhramadatt that he has always been working behind him and had never openly interacted with Ayan’s predecessor. This scene does not last for too long in terms of screen time but nevertheless leaves a strong impact and shows that characterization and performances are really strong in the film.

Ayan Ranjan is a young IPS officer shunted off to a seemingly nondescript Lalgaon in the heartland of Uttar Pradesh. Right from the very beginning he is taken aback by the rampant casteism that is seen and practiced all around Lalgaon, including within the police force as well. Even before Ayan could settle into his new role and territory he comes across a case of 3 missing Dalit girls, his team treating the matter lightly though. Things turn grim with 2 of the 3 missing girls found dead in a shocking manner. The 3rd girl is still missing and Ayan realizes that he has to not just find her, but salso do whatever it takes to unearth the sinister developments that led to all this. In the process Anubhav Sinha takes us through a whole series of incidents, developments and happenings which show us not just how badly casteism is deep rooted in the hinterland, but also how a lot of people end up endorsing it without realizing that they are actually committing a crime.

Anubhav Sinha and his co-writer Gaurav Solanki have clearly done a lot of homework, there are references to some controversial true life events from the recent past that are seen in the film. Also it’s important to observe that the film is not coming across as a prejudiced view on the whole caste system, seen from a particular perspective. An upper caste individual championing the cause of the dalits or having a soft corner for them can sometimes be viewed with suspicion, as seen in the way the CBI officer Panicker (Nassar) questions Ayan and mentions the misgivings about Ayan’s intentions. But this is why a film like this works in the first place, as the attempt is definitely seen to raise questions, but not just for the heck of it. With Article 15 it’s a clear signal from Anubhav Sinha that his previous film Mulk was not a fluke and that he is deliberately attempting to break the clutter with films like these.

Article 15 has many impactful moments, some fantastic dialogues adding value to the same. Ewan Mulligan’s cinematography is to be noted for the greyish tone that is seen for most parts of the film, adding grimness to the proceedings. The actors do a wonderful job, making the output on screen look as real like as possible. Mohammed Zeeshan Ayyub as Nishad, the dalit firebrand is good in the cameo but the use of his voice over at places appears a little strange. Sayani Gupta as Gaura, the bold dalit girl makes good use of her screen time, getting a lot more scope than Isha Talwar who plays Aditi, the socially conscious lady love of Ayan. Nassar as Panicker is effective as always, registering an impact with the few scenes that he has. Kumud Mishra and Manoj Pahwa are the true stalwarts of the film, both of them so seamlessly slipping into their respective characters.

It's nice to see Ayushmann Khurrana doing a film like Article 15, though he may not look way too convincing as a cop. But then Ayan Ranjan is someone who is akin to a fish out of water, a misfit of sorts in the environment of Lalgaon and that makes Ayushmann’s presence all the more relevant over here. Article 15 eventually is a film that would leave you pondering, make you recollect many moments for sure but there’s unfortunately a strange feeling of something missing as well. Anubhav packages the film interestingly no doubt, ticking off most of the boxes but there was clearly something more possible.

Article 15 is an important film that highlights an essential and fundamental subject and is a good follow up film to Mulk by Anubhav Sinha. It stops short of being a great film, nevertheless the output is definitely well worth the visit to the cinemas this weekend. 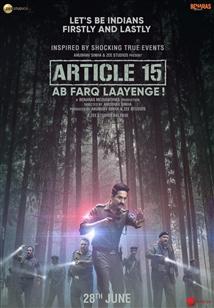