The shooting of actor Madhavan’s upcoming film Rocketry: The Nambi Effect has been wrapped. Madhavan who plays the titular character of ISRO scientist Nambi Narayanan has also co-directed the film along with Kerala-based journalist turned director Prajesh Sen. Madhavan took to his TWitter page to announce the end of filming.

ITS A FILM WRAP FOR 🚀ROCKETRY.. Thank you to the most OUTSTANDING crew EVER FOR THE MOST AWESOME SHOOT ever in my life. So many emotions and mixed feelings..I hope to make you PROUD .. 🚀🚀❤️❤️😘😘🙏🙏 @ActorMadhavan… https://t.co/vhrA5aFn3K

The film 'Rocketry The Nambi Effect' is based on the life of former ISRO scientist and aerospace engineer S. Nambi Narayanan. He was accused of espionage in 1994 and arrested by the CBI. However, in 1998 it was proved that he was innocent, following which the Kerala government awarded him a compensation of Rs 50 lakh. He was also awarded Padma Bhushan in 2019.

The film is bankrolled by Tricolour Films in association with Vijay Moolan Talkies and Saffron Ganesha Entertainment. The multilingual film has music by Sam CS. The film also has Simran and Rajeev Ravindranathan in the cast. Rocketry will release in three languages - Tamil, English and Hindi. 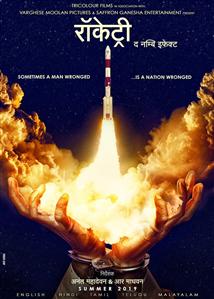