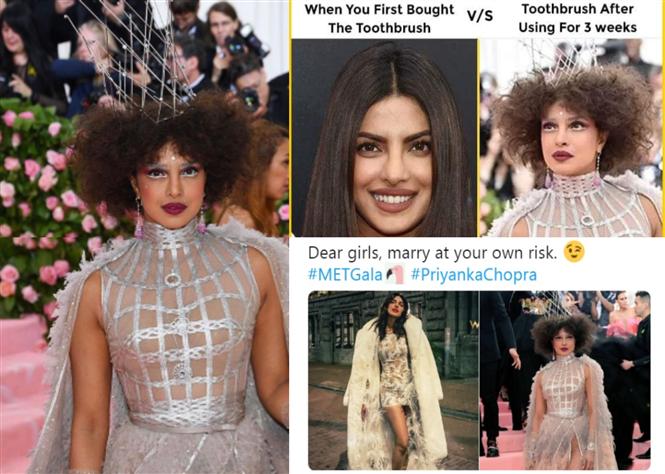 If one may recall, Priyanka Chopra's 'Trench Coat' look from Met Gala 2017 (the same year where she first made an appearance with her now husband Nick Jonas) was turned into a meme by the Indian netizens which was even acknowledged by Pee Cee on her social media page.
This year's 'camp themed' Met Gala had Chopra sporting an afro-grungish look which has again been taken to the meme town, a few examples of which can be seen here:

This is so true.😁
.
.#PriyankaChopra #MEMES #MetGala pic.twitter.com/Qao8Z2EeHP

#PriyankaChopra #MetGala
When you face network connectivity issue and then you decide to carry the network tower along with you pic.twitter.com/L7YO2YKpX0

Woke up like this (Expectation vs Reality) #PriyankaChopra #MetBall2019 pic.twitter.com/DxdSYkDymo

Pic 1: Before marriage
Pic 2: After marriage

Dear girls, marry at your own risk. 😉#METGala #PriyankaChopra pic.twitter.com/KV0fa3R7Qi

All jokes and fun aside, the twitterati was also in awe of the Indian representation at one of the highly publicized events in Hollywood and they made sure to compliment Priyanka and Deepika Padukone, both of whom were attending Met for the third time in a row:

Never forget #DeepikaPadukone and #PriyankaChopra two desi queens made it to the most celebrated red carpet in the world without any godfathers any mentors any privilege. You know what they say... there’s no substitute to struggle. Keep shining! pic.twitter.com/CAEjiP5VD4