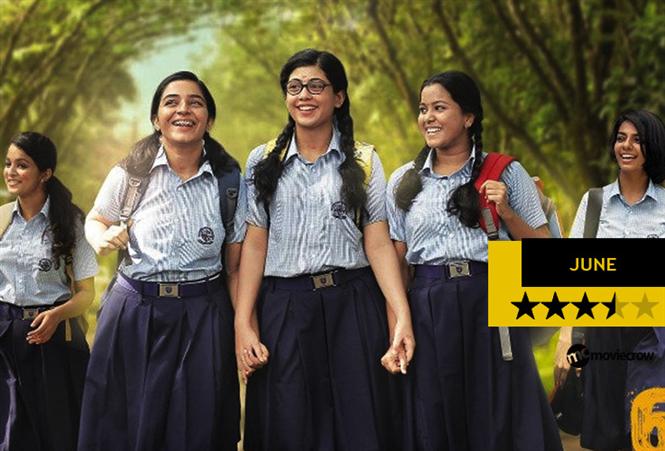 Ahammed Khabeer's June is a nostalgic coming of age film about June, played by Rajisha Vijayan. The film encompasses around her school days, college days, career delusions and her constant search for not just a partner but a companion who will understand and be by her side.

After the Nazriya starrer 'Om Shanti Oshana', June really takes us a journey through the shoes of a girl. Rajisha brings the character heartwarmingly alive. The traits.. gestures.. everything comes off real. It is amusing to see how much you get into the mind and psyche of the character without it being loud or say, a physical acting like that of in Alia's from 'Dear Zindagi'.

There is a constant dig of fun and puns. I chuckled hard when she looks at Ambedkar's photo in her roommate's place and asked whether she is a Mammooty fan. The film brushes off even the heaviest of melodramatic moments with ease. The get together portions that happens towards the end is a mini '96' on its own.

Sarjano Khalid delivers a lovely debut as Noel. The innocent, introverted outsider side of the role is boyishly done to perfection by the actor. Arjun Ashokan plays an interesting character as well. And there are bunch of debutants who all shine in the little parts they play. Like Aanandam.. from cast to crew, location to soundtrack.. this film is an ensemble that's just perfect as it is.

Ifthi's songs work big time to tell the story. The melodies seamlessly linger around the many facets of June's life. Jithin Stanislaus's cinematography delightfully captures the mundaneness of everyday life without being repetitive. Lijo Paul's editing is brilliant. The sequencing of the final reveal about how June agreed to marry Alex (Sunny Wayne, in a lovely cameo) leaves you with a bit of sweet surprise.

Ahammed Khabeer's June is all heart. From teen crushes to heartbreaks.. June is a rollercoaster of a ride that takes you a trip down your memory lane as you watch it.