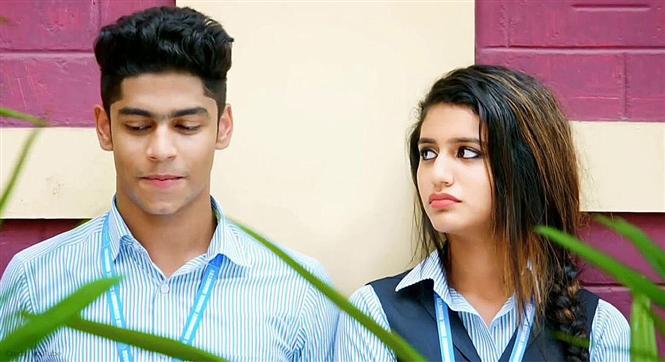 At the start of Omar Lulu’s Oru Adaar Love you get to understand that the tale is set in a convent school and revolves around a batch of students who have just joined the higher secondary section. Roshan (Roshan Abdul Rahoof), a new joinee chances upon Priya (Priya Prakash Varrier) and falls for her. Deciding to act like a senior and use the ragging route to get acquainted with her, Roshan goes about his act confidently. But their conversation is pedestrian and seems to be written by some random school kid perhaps. Why on earth would you on hearing that her name is Priya Varrier, respond by asking her how is she related to Manju Warrier? The scenes that immediately follow, a bunch of seniors who actually take offence at Roshan pulling off the senior act and attempt to rag him, only to be saved by someone else are again indicators of the kind of difficulty that one is going to face in the course of watching the movie.

Who would have imagined that a song from an unreleased Malayalam film song would go on to become a rage across the country? In fact it wasn’t even because of the song by itself, but just one solitary moment from the video of the song (Manikya Malaraya Poovi). Of course I am referring to the “wink” adopted by Priya Prakash Varrier, something that went on to become probably the most discussed, most watched & (maybe even) liked video around the same time last year. The popularity led to so many people, including those unfamiliar with Malayalam cinema, expressing their interest in watching Oru Adaar Love. But while the film was probably meant to release not too long after the song was unveiled, the unexpected popularity and craze actually ensured that Omar & his team went on an overdrive to re-write and even re-shoot parts of the film. And thus this Valentine’s Day the film has finally managed to hit the theatres, but is it really the Valentine’s Day special that it was aiming to be?

Oru Adaar Love talks about life in a convent school, seen from the eyes of a few students who join Class XI and the two important years in their lives that they spend in this school. However in Omar Lulu’s world schools are only meant to be romantic playgrounds, where everything else takes a backseat, so what if most of the main characters are even science students. Hence everyone is only interested in getting hooked to someone of their choice and soon we see Roshan and Priya becoming a couple, with Gadha (Noorin Shereef) being the ideal friend that everyone would love to have on campus. Over the run time of 145 odd minutes we see only various episodes from their higher secondary school life, most of them intended to be funny but only a few genuinely managing to tickle our funny bones. And if this was not enough then Omar tries to startle us by going for an abrupt climax with an attempt to gain brownie points for shock value.

Forget about the writing or re-writing, the film actually comes across as just a bunch of amateur YouTube videos of sorts strung together with a common theme. There are attempts to constantly remind you of films like Premam, Anandam and other campus stories but these references only make you revere the other films all the more instead. Various senior actors like Siddique, Sreejith Ravi, Salim Kumar etc. feature in the film in one of the “segments” but do not get to contribute much. Of the supporting cast only Hareesh Perumanna manages to have some relevance to the proceedings. Shaan Rahman’s songs may not be counted among his best but they do suit the requirement of the film. Of the youngsters who get introduced in the film it is easily Noorin Shereef who is the pick of the lot and someone who holds promise. Roshan is raw but likeable to an extent while Priya Prakash Varrier is extremely disappointing and not worth all the hype and attention.

The only benefit out of all the popularity that the film had managed to generate has been in terms of the film’s commercial prospects, what with the film being dubbed in  Tamil, Telugu and Kannada and getting released in these languages too simultaneously. Otherwise this is just an example of a film that’s high on hype and low on substance.

Oru Adaar Love is a weak film from Omar Lulu, one that tries to appear like a cool campus film but doesn’t succeed at all. 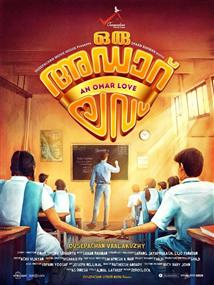