The Telugu version of Ghazi, a bilingual being made in Telugu and Hindi has been censored with a clean U by the Central Board of Film Certification (CBFC). The movie which is based on true events from the Indo-Pak war in 1971 features Rana Daggubati and Tapsee Pannu in lead roles. It is Tollywood's first true-life war film and will see Rana playing a Naval officer and Tapsee as a refugee from Bangladesh. Atul Kulkarni and Kay Kay Menon play pivotal roles in the film which is a K musical. The movie, produced by PVP cinemas will hit theatre screens on February 24, 2017. 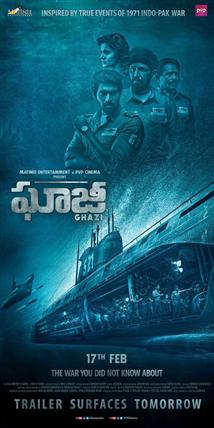